My beagle, Bridget, ruptured her cruciate ligament (with partial meniscus tear) in April, 2015, and we chose the Traditional Repair for a couple of reasons: Bridget is an older dog (rescued her over 10 years ago when she was already an adult), and she also has arthritis. Because of her age, I wanted the least invasive surgery possible. Her weight (38 lbs) falls well within the parameters for successful Traditional Repair, so that’s the surgery I chose for her.

The first week was so, so hard! Be ready to stay at home 24/7, and get the best, most comfortable sling you can to help your dog go outside. You’re not just protecting her bad knee, but you’re taking the stress off her good knee so that doesn’t get injured as well. Make liberal use of all the medication the vet gives you. The quieter your dog is, the better she’ll heal. We cordoned off a quiet portion of the living room with a couple of mats and cushions for her to lay on. Don’t laugh–I stayed in there with her and slept on the sofa for the entire first week. She was very uncomfortable and I had serious doubts about whether the surgery had gone okay. 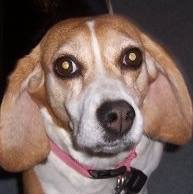 The second week was only a little better. She was resisting walking on it and seemed in discomfort most of the time. I slept on the sofa near her and spent most of my time with her in her penned area.

The third week was again just a little better. I was second-guessing my decision and felt that the surgery wasn’t working for her.

The fourth week–yay! She finally started sniffing when she went outside, and I began weaning her off the sling. Don’t worry about providing them with a little support when they go out–again, you’re helping to keep the good knee from being over-strained. Bridget had her 1 month check-up and the knee was healing very well. From this point it was all about keeping her quiet. If you don’t want complications from the surgery, this is critical. We expanded her pen to include the whole living room, and she seemed to be content if someone just sat in the room with her. From this point on, it seemed like she was in no discomfort at all.

After the second month we put rugs EVERYWHERE, and gave her access to the whole house (no stairs, of course). We kept her on a leash outside, though. It’s now been 3 months since her surgery, and she only has a slight limp occasionally. She’s allowed to run now, and it’s a joy to watch her go from tree to tree like she used to. She’s still old, and still has arthritis, but the surgery was a success and I’m so glad I did it!