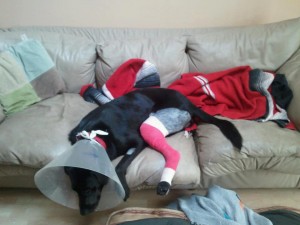 My dog, Charlie (2 year old black lab) was running for a ball at the dog park, tripped in a hole, and yelped. He was diagnosed with a torn ACL and scheduled for surgery at a cost of $2500 plus (plus the cost of the exam and x-ray-another $250 since they had to sedate him).

We brought him home after about 5 hours. He had bright pink bandages going up his leg to protect the incision. The E-cone freaked him out, to the point where I was worried about him damaging his leg. He slept most of the evening. During the night I took him out to the backyard to pee, then back inside to drink and take his pills. After a full day of laying down, he felt comfortable where he crawled up on the couch where he laid the remainder of the evening/night. 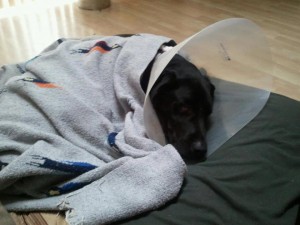 The first week was a slow week of taking him out to pee/poop. The second week, he had much more energy, still limped quite a bit. 3-5th week, increasingly energy. We’re at about the 7 week point right now. Let me just tell you, trying to keep a normally active dog contained is next to impossible. The reality is, I never crated him. The few times that I tethered him, he chewed the leashes in half. He ate his Kong into shreds in less than 5 minutes. Good luck getting him to lay quietly all day with a Kong. I We took him with us in the car so he could get out. We stayed home with him a lot but let him putter along side us when we do things around the house. We bent the rules a lot with Charlie. He seems to be healing well. 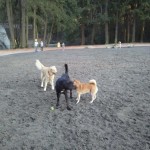 At 7 weeks, he walks with barely a limp. The vet assistant had to convince her co-worker that she saw his surgery, as he jumped up and over their desk (their fault, not mine) at 4 weeks post surgery. For him, relaxing the rules worked in his favor. It probably isn’t for everyone. His leg looks just like the other one, no muscular weakness.

My advice to other future TPLO moms and dads: