You are here: Home › American Bulldog with 2 TPLOs on the Same Leg – Lucy

American Bulldog with 2 TPLOs on the Same Leg – Lucy

Lucy was diagnosed with a Cruciate tear, in both knees. One, more painful than the other. So, I contacted a local vet who had an Ortho vet that comes in and does the surgery….all sounded perfect as we both work and this would be a local office instead of having to travel. (Costs $3400.00)

So, we showed up to bring her for surgery and then they advised us the Orttho vet only did TPLO”s there….if a TTA was needed we would have to bring her to his office, 1.5 hrs away, which is an Emergency service. So, the vet tech told us he would look her and her xrays, decide which was best, then call us. 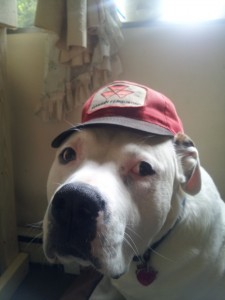 So, we waited and waited and by the time I decided to call and see what was going on, he was in the middle of a TPLO…so we brought her home and prepared to help her through recovery.

Around day 7, she developed a fluid sack and began limpling. On day 9, she went to our vet to have her staples removed and xrays taken. We took her to our vet because when we picked her up from surgery we were told she can go anywhere for this, because we would not see the ortho vet unless we went to his office..so our vet xrayed her and showed myself and my husband that all looked good. Then the limping got worse, but the sack went away….my husband figured she got caught in a blanket that we had in her box, so we took it out and kept an eye on her. Still did not get better…week 6 she goes for more xrays at the ortho vet’s office.

He tells us she broke a bone and the screws were torn out….no idea how this happened…so he has to go in and redo the surgery….which now costs us $4100.00. So now a total of $7500.00.
We picked her up the next day ready to get her through this. All seemed good until about week 3…on Friday morning, she developed a “pimple like dot:” at the top of her incission. Then, by friday afternoon it is hot and oozing. Called the ortho vet, they told me it was probably becuase of the healing and she has been licking it, so we put cortaid on it, gave her some sedatives and put her E-collar on.

By 3 AM Sat morning she was worse and it was real hot. So, off to the Ortho Vet’s emergency office. She is infected, they need to keep her and do xrays to see if the infection has gone to the bone.
They called us a few hours later saying they have to open her back up…(3rd time in 3 months) to clean it out and scrape away all the bad tissue.

Got a call later saying she is out of surgery and resting well. We will pick her up at 6 AM Sunday morning.

Get to the vets at 5:45 AM to have him explain when they sedated her…her heart raced out of control…they are not sure why…but did get it under control, they hoped, before it did damage….and after reviewing all of the xrays…she has a screw that is still in 2 threads, but broken in side the bone….UGH…

They have sent a culture of her infection out to determine if it is a sterile or non-sterile infection….. cost now officially at $10k.

They are now concerned that her body has been rejecting the metal and this is why the infection is occurring. I can not believe how much our girl has been through…she is such a wonderful baby and doesn’t deserve this ….and i feel helpless.

Thank you all for letting me vent…