My 1-yr old rottweiler, Rosie, suffered a right broken leg in May 2010. In Nov. 2010, she had TPLO surgery in an Orthopedic Hospital to repair the CCL and correct the angles in her leg. 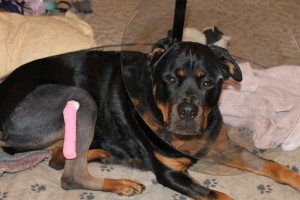 Two weeks post-op, she developed severe swelling in her leg & abdomen, and a fever. I took her to my local Vet, & they sent me to the Orthopedic Hospital. Rosie was put on Clavamox, & they took a culture of ooze coming from her recent suture site. Several days later, she was switched to Zeniquin – to treat a Staph infection. She stayed on Zeniquin for 2 weeks.

Six weeks post-op, Rosie broke the top 3 screws of her TPLO brace while pulling on her leash in 2″ of fresh snow.

The next day, we returned to the Orthopedic Hospital. They stabilized her leg, and the following day, on Dec. 29th, a TPLO repair was performed. She received 3 new screws; an external fixator; and her leg was injected with antibiotics. Zeniquin was continued for 6 more weeks. Another culture was taken.

Seven weeks later, on Feb. 15th, 2011, Rosie’s external fixator was removed because the upper rod was loose. Another culture was taken.

Several days later, the culture showed 2 BAD bugs. Rosie was put on Amikacin injections for 2 weeks, & Chloramphenicol for 6 & 1/2 weeks. She lost her appetite; lost 10 lbs; needed daily sub-Q hydration; developed a stomach ulcer; & stopped using her right hind leg. She was still oozing staph from a site on her leg. Rosie’s blood & urine were checked weekly. I fed her small pieces of food by hand, & used a syringe to feed her A/D.

In late March, 2011, Rosie received another injection in her leg (around the bones/plate/ & screws), of antibiotics. It was decided that the plate & screws will have to be removed after her bones have healed.

On April 14th, Rosie was started on Avelox, for 4 weeks.

She was taking Carafate for her ulcer, which healed quickly. Rosie put on weight, & started using her leg again! Rosie’s xrays showed good bone growth – for the 1st time since Dec. 2010.

April 27th, Rosie returned to the Orth. Hosp. for xrays & evaluation. Excellent bone growth; building more muscle. Scheduled to return back to Orth. Hosp. in early June for more xrays. Hoping to get the hardware removed!

Rosie will get more antibiotic injected around her bones, when the hardware is removed. Another culture will be taken. I’m sure she will need more oral antibiotics. At some later date, Rosie will need arthroscopic bi-lateral surgery on her elbows to remove bone chips due to dysplasia. We will keep our fingers crossed for her future.

Currently, Rosie is happy; eating well; playing; & using her leg very well. She has built a lot of muscle. Rosie will be 2 years old on July 4th, 2011.

To summarize, we almost lost Rosie due to infections & medications. We considered amputation of her rt. hind leg; and even euthanasia. It was a very dark 6 months. Of course, Rosie was, (and is), taking 6+ Tramadol daily for pain. Thousands of pills/hours of care ’round the clock.

My previous rottie had 2-TPLO surgeries with no complications. He had 6 more years of running & playing.

On June 15th, Rosie had the plate & 6 screws from her TPLO surgery/ & revision, removed due to contamination from staph. The original top (3) broken screws were left inside the bone. They were entirely encased in solid bone.

Purulent material was removed from the joint capsule; and slime was debrided off the bones. R-gel antibiotic was infused around the entire area. Rosie was kept in a hard cast for 2+ weeks.

After culture results came back, Rosie continued a 6 + 1/2 week course of Avelox.

We are keeping our fingers crossed! Rosie is doing very well now. Will keep updating.

Rosie is now getting aquatherapy! She finished her antibiotics, (Avelox), and is rapidly growing muscle!

I’d like to give credit to (VOSM), Vetetinary Orthopedic Sports Medicine Group, Annapolis Junction, MD. Dr. Sherman Canapp is Rosie’s surgeon, and Dr. Scott Christopher helped us every step of the way. They saved Rosie’s leg, and her life.