You are here: Home › Surgery vs. Alternative Treatment – Dhani Doberman

My dog has been favoring a back leg for months, but not been lame. He was playing, landed on my other dog, and yelped. At the time I thought it could have been a muscle strain, so I kept him on the lead for two weeks but to be fair he wasn’t lame! I took him to the vet and said I’d noticed he would sit but then slump. After examination, the vet said it was a cruciate problem so there was no need to x-ray, which made sense to me as an ordinary x-ray wouldn’t show a ligament.

I was advised to do injections for 4 weeks to help the joint. I did that and still tried to keep him calm. He found his opportunity one afternoon and saw a cat off the premises! He wasn’t lame until later; after sleeping he got up, took 2 or 3 steps wrong, and then was fine again. I spoke to the vet who then said they would like to sedate him and x-ray for a decisive diagnosis. I can’t pretend to be in agreement but thought I should put my trust in them. 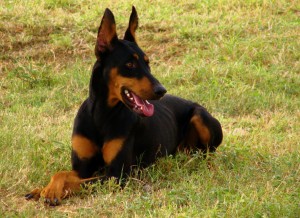 He had his day at the vet’s (two x-rays) and when I was shown them they couldn’t see exactly…so they gave me a referral to an orthopaedic specialist. I was rather peed off at this and started to look for alternative treatments. Oh what joy when I came across people and vets who were in the same mindset as me! I don’t want to put my mate through this operation unless it becomes essential to his life!

I’ve cried buckets worrying. I postponed the op, not wishing to burn my bridges, and am getting a brace to try (ironically spoke to my horse vet this week and he agreed try the brace!) I think a lot of vets are too quick to operate rather than give time and care, which all us animal lovers are so prepared to do.