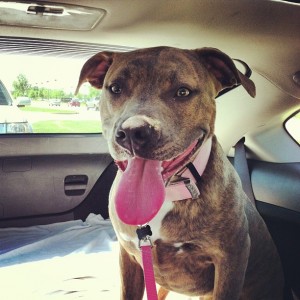 Phoebe is our 1 1/2 year old pit bull. She was dumped with 9 other brothers and sisters at our rescue, Tyson’s Chance Animal Foundation.

Phoebe is your typical dog. She loves long walks, running with her friends, treats, car rides, new faces to kiss, and oh, did we mention treats?
Soon after we moved in to a different home, I noticed Phoebe sitting really weird. She put all her weight on one side and favored her left side. I noticed she got up from a lay/sit position very slowly. She started having a hard time getting on our bed. After freaking myself out with Google, I made an appointment. Our vet told us she was overweight but other than that she was fine. She weighed 71lbs. She was a chunkster. They sent us home with a bag of “special diet food,” and I thought everything was fine.

Not even a week later I noticed her limping. She couldn’t get on the bed. She preferred laying to sitting. When she did sit, it was awkward and looked very uncomfortable. I immediately called our vet, luckily a 24hr ER vet, and told them my concerns. They said I could bring her back in and charge me for the vet visit and for x-rays. I screamed some profanities at them and requested the vet call me back asap. Hearing from the vet brought no comfort. She took no responsibility for sending me home with special diet food and telling me my baby girl was fine. We did not go back.

I did more research on my own and spoke with a few friends in rescue who had experienced some similar situations with their personal dogs. I decided it was time for another opinion and reached out to another vet who I knew personally. 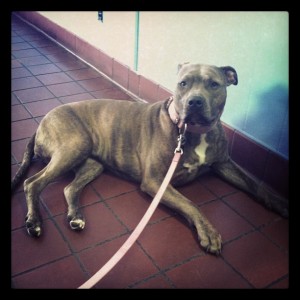 Dr. Della was very informative and knowledgeable. She knew her stuff. We received x-rays with her. The information she gave us scared the hell out of me. Both of her ACL’s were injured, potentially torn. Phoebe had poorly set hits (dysplasia). She also felt she may has a meniscal tear.
My best friend, vet tech for awhile, told me we should look in to the traditional surgery(better for our budget) and try to avoid a TPLO or TTO/TPO. Dr. Della was very adamant on Phoebe going with one of the modern surgeries because her injuries were more severe.

I was going to vet appointments with Phoebe by myself and relaying the information to my boyfriend. When I told him the cost of both knees, at that time estimated to be around $2500 a piece, he wanted another opinion.

We went to our rescue vet in Shelbyville, KY, the vet my best friend took her oldest dog to for her referral for traditional repair, Dr. Belcher. Dr. Belcher checked out Phoebe’s x-rays and palpated her knees. She gave a very similar diagnosis to Dr. Della. Dr. Belcher only strayed in the opinion that both knees should be done at the same time and her left knee wasn’t as bad as the right. She felt her left knee may be a candidate for traditional instead of TPLO. We were finally ready for our referral. 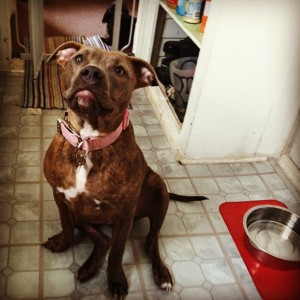 Today was our visit with Dr. Neat at Metropolitan Veterinary Specialists. Dr. Neat provided detailed information, surgerical plan, and aftercare. He concluded both of Phoebe’s knees will need TPLO. He quoted us at $3200 per knee. That doesn’t include aftercare or aftercare x-rays. That price tag was a big blow but we will make it work.

Phoebe’s first TPLO surgery will happen on May 21st, 2013. Even after all the bad news, Phoebe is still a ball of energy. You would never know she had two torn ACL’s if she wasn’t bolegged and walking strangely. She runs, jumps, runs some more, gets on/off the bed/couch. She is a normal dog. She is being treated with pervacox and trymadol. I think this gives her false sense of strength. She rarely shows pain. She will cry if one of other dogs plays too rough.

She is our baby trooper. This site has given me relief, strength, and hope for her future. I am scared but also excited for her first surgery. I can’t wait to have my baby back in full health.

I hope I can continue to update Phoebe’s story and share her road to working knees!