An exciting new surgical option has been developed for treatment of canine cruciate injuries. It is called Simitri Stable in Stride®, invented by Dr. Neil Embleton and Dr. Veronica Barkowski in Alberta, Canada.

Dr. Embleton has almost 30 years of experience in treating canine cruciate injuries and has performed at least six thousand repairs, conservatively. He is certified in AO/ASIF techniques, spinal surgery, arthroscopy, TPLO, and total hip replacement. After performing close to 2,500 TPLO surgeries, Dr. Embleton started to question the goal of geometry-modifying procedures. “I began to think about what the role of the cranial cruciate ligament was and how we could reproduce its function and maintain joint biomechanics in as least an invasive method as possible. That process began 6 years ago. The result was the Simitri Stable in Stride® implant,” he said.

Simitri Stable in Stride® is a three-part, modular stifle (knee) stabilizing implant. It is designed to provide continuous translational and rotational stability while minimally affecting stifle kinematics and biomechanics. It is this symmetry between the two main objectives of cruciate repair techniques–stability and kinematics–from which the name Simitri is derived. Other surgical procedures would often result in one objective or the other, but never both. Simitri has changed that. No osteotomy (cutting bone) is performed and joint architecture is preserved. The implant is made with surgical grade stainless steel femoral and tibial plates and an ultra high molecular weight polyethylene (UHMWPE) sliding articulating insert. Dr. Embleton explains in detail how it works in this interview with Dawg Business: 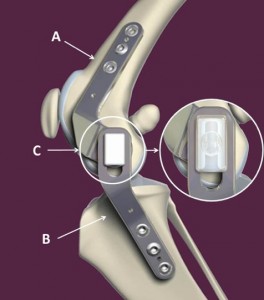 “The femoral plate has a ball and stem which interconnects with the tibial plate via an 8 mm travel channel within the articulating insert. The implant is attached to the medial (inner) side of both the femur (thigh) and tibia (shin) using six cortical locking screws. The implant does not go into the joint and, no bones or muscles are cut during the procedure making it a less invasive option.

Joint biomechanics (function) are not significantly altered during the procedure. Once implanted it provides immediate and continuous translational and rotational stability while allowing the joint the freedom to flex, extend, compress, expand and move side to side in as normal a manner as possible.”

Dr. Embleton and Dr. Barkowski focused on evidence-based results as much as possible during the development process. “Implant design engineering was done using CT scans and CAD software, the implant design was tested and refined using 3D computer modelling and biomechanical testing. Finally, cadaver work was used to establish the surgical procedure before going anywhere near a live patient,” Dr. Embleton said.

Dr. Barkowski has been practicing veterinary medicine for nearly 30 years as well. While her main area of expertise now is soft tissue surgery, she was instrumental in the development of the Simitri implant and the surgical technique, said Dr. Embleton. She was especially involved with developing the method used to accurately position the implant during surgery based on measurements obtained from the preoperative radiographs.

While it is difficult to compare Simitri with other existing surgical procedures due to such stark differences in technique, results from Simitri clinical trials are promising. So far these trials have shown that after Simitri surgery, dogs regain normal range of motion, which has not been shown in studies of any of the current procedures. 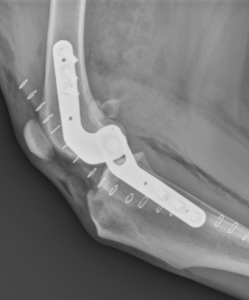 The initial study of the first 66 Simitri cases indicated very similar complication values compared to what is currently reported for TPLO and TTA surgeries; however, the types of complications encountered were significantly different and generally less serious than TPLO or TTA, Dr. Embleton said. Because Simitri is less invasive than other procedures, osteotomy-related complications (eg. higher rates of infection) are nonexistent. Minor complications such as incision site breakdown, swelling, and bleeding can be expected to occur at similar rates after any procedure.

Simitri is designed to provide stability in the knees immediately after surgery and remain stable throughout the entire phase of stride (both weight bearing and non-weight bearing), unlike other surgeries. With TPLO and TTA, for example, the knee is purported to be “dynamically stable,” which means it is stable during only the weight bearing phase of stride. The full stability in Simitri knees may protect the joint from further damage, especially to the menisci (cartilages). “To date we have not seen any dogs develop clinical signs of meniscal tears after Simitri surgery,” Dr. Embleton said. 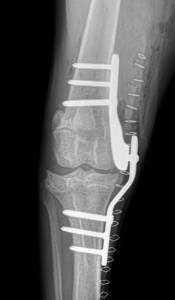 After 175 cases of Simitri surgery performed by Dr. Embleton, there has yet to be a documented case of postoperative infection. Rejection of the implant is also unlikely as both surgical grade stainless steel plates and the UHMWPE are both highly biocompatible.

Although dependent on age, breed, degree of preexisting disease or injury, and rehabilitation effort by the owners, most Simitri dogs return to their preoperative activity level within four months. Ideal rehabilitation includes controlled exercise, massage, and passive range of motion exercises, all of which are designed to strengthen the hind end and increase ROM of the ankle, knee, and hip. Because there is no cutting of bone or muscle during the procedure, postoperative restrictions are not as onerous, said Dr. Embleton.

Simitri is an option for any dog (without neoplasia or a known infection) that fits the currently available implants, which fit most dogs between 44 and 79 lbs (20-36 kg). A smaller design is also available that should allow dogs as small as 22 lbs (10 kg) to be treated. Implants for dogs larger than 80 lbs are currently in the design process and will hopefully be available by the end of this year. Simitri is an option for dogs of any age as well. In fact, “Simitri is ideal for older patients,” Dr. Embleton said. “Our oldest patient treated to date was 14 years old. He was walking within 24 hours of surgery.” The longest cases of Simitri knees have been out for over three years now.

As far as geographic availability is concerned, there are several vets in both Canada and the U.S. who are now performing Simitri surgery. Dr. Embleton and Dr. Barkowski hope that Simitri will become more widely available as awareness and knowledge of the procedure grows in the veterinary world. “We now have pre-surgical planning guides and a step-by-step surgical guide to assist surgeons in performing the procedure. We are also considering offering wet labs and I am willing to help any veterinarian at any time,” Dr. Embleton said. The implant itself is manufactured in the U.S. and is available worldwide.

There is still a long way to go in the evolution of canine cruciate injury repair techniques, but Dr. Embleton is optimistic about the future. “This may sound strange coming from a surgeon, but my hope is that one day we can use nonsurgical means to treat, or better yet to prevent, cruciate ligament disease,” he said. While it will probably be many years before that option is available, he believes that immediate stability throughout the stride is the key to success in cruciate surgery. “I don’t know if the Simitri implant is the answer that we have been looking for, or just the direction we should be following. I do know this: we now have a new way to look at an old disease.”

Dr. Embleton would be happy to hear from dog owners and their veterinarians. For questions or more information, you may contact him directly at stifle.simitri@gmail.com. Veterinarians can also contact New Generation Devices for more information about the Simitri implant.