Our 6 month old rescue Greyhound/GSD cross was playing with another dog at the park and we heard a yelp and he started to limp. It looked at first as if he had hip dysplasia and had tweaked it, he had the typical wiggly walk and tended to bunny hop instead of running, including when going up stairs when he was tired. We booked him in to see the orthopedic surgeon and discovered it was his knees.

Because of his age and the fact that his growth plates were open, we decided to try disrupting the front of the Tibial growth plates on both sides so that the back of the tibia would continue to grow and change the angle of his knee. A TPLO cannot be done on dogs his age. Louie was 7 months when the surgery was done so we are hoping his bones have enough growing left to do to get a good angle.

The first 5 weeks of his recovery were AWFUL he couldn’t keep still and managed to cause a big seroma on his knee that had to be drained without sedation while we held him down, poor guy. He was then firmly bandaged by the vet, but it was too tight causing the bandage to eat into his leg. He ate 6 of his giant head cones and had to be sedated strongly and then crated constantly at a special vet nurse boarding facility.

Once we got that sorted and the injuries were healed he could be out of the dreaded cone, and allowed home to relax, be out of a crate and do gentle 10 minute walks 2-3 times a day. Louie doesn’t quite understand the gentle walks concept. He grew a lot in the 6 weeks, and now is a pulling 75lb machine. We have to stop him jumping and pouncing on his toys. Hopefully he can be allowed off leash at 12 weeks post-surgery.

He has unfortunately become dog and people reactive, and recovery seems to have given him quite a few quirks that we will need to work on. But we are hopeful that this surgery will fix the issue. The final results won’t be seen for about 3 more months when he stops growing. It is a good option for very young pups with knee issues. 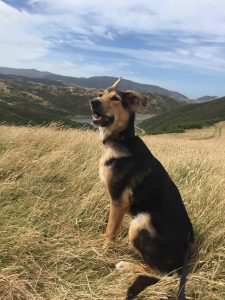