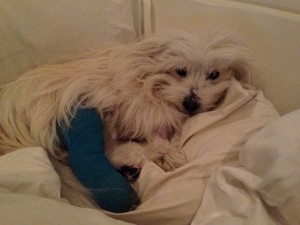 My little Coton De Tulear, Mack, tore his ACL/CCL on the night of Feb 4th, 2013. He’s an extremely athletic and fast little guy – loves to jump and move at the speed of light outside. He thinks he’s the head of National Security of the Street, and I believe his ACL finally gave out while he was running back and forth guarding his territory from someone outside the fence.

I went to his regular vet on Feb 5, the morning after he started lifting his leg. He was running outside and next thing I knew he refused to let his toe touch the ground. One of the vet’s at the practice I go to diagnosed it as a cruciate ligament tear. She wanted to give him NSAID’s and wait 2 weeks and then do surgery and said he would have arthritis. That didn’t make sense to me. Why would I wait two weeks? Also, if he was going to have surgery I was going to take him to someone that does this 24/7. Sorry, but not the regular vet.

I did a bunch of research and found one of the best animal surgery centers an hour outside of Los Angeles (where I live). One of the doctor’s there specialized in cruciate injuries and everything I read about him made me feel confident (Dr. Tony Cambridge). I made an appointment the next day. I would pay any amount of money for Mack, but luckily I also have pet insurance which did indeed cover this type of injury.

Upon meeting the surgeon, I immediately trusted him. He said it was indeed a ACL tear and something that was likely bothering Mack for a while since he had been putting most of his weight on his other more muscular leg.

(Looking back, I did notice Mack was sitting and resting more than usual right before he officially tore it. So the signs were there. I did also remember seeing him limp one time a month before for just a quick moment… and then it went away. I also remember one time he was playing really hard with a puppy and he yelped and then limped. But that was almost 2 years ago. It’s possible that’s when it started slowly tearing.)

I asked the doc why the vet would want to wait two weeks. He said there’s no medical reason for that at all – maybe that’s when they had time available. I asked if he was going to have arthritis – he said that this was caught early and that isn’t a concern. I asked the doc if it was going to happen to his other knee (I had read that) and he said not likely. That this didn’t seem to be a genetic thing. Simply an accident. His breeder said she had never had one of her dogs tear a cruciate, so the confirmed it was not genetic (I know it can be in small breeds such as bichon’s and yorkies).

My little guy weighs between 17/18 pounds and the surgeon recommended the Lateral Suture technique. He said he advises surgery only because Mack is so very active (obviously since was trying to jump all over him on his 3 legs). He said he doesn’t recommend TPLO — because in his experience dogs this small don’t get any extra benefits and the results with the Extra-capsular are exactly the same.

They performed surgery that very day. And I felt totally at peace. I knew that I was doing the right thing and I was at the right place with the right doctor. After the surgery he told me that things went as well as they had hoped. That the tear was indeed brand new and that the meniscus was not damaged at all.

Mack had to sleep there which was hard, but the nurses texted me photos of him post op letting me know how he was doing. I picked him up the next morning; poor guy was in a little blue cast and was high as a kite. They sent me home with a ton of painkillers, NSAID’s, antibiotics etc. I just made sure he was as doped up as possible the first few days because he did NOT like that cast.

After about 4 days he seemed to become semi-used to being in the cast. He was peeing with it and holding it up (like lifting his leg only it was a cast haha). That same day I went to get the cast removed.

Once the cast was removed he completely FREAKED OUT – was fighting being handled by the nurse, was fighting everything. They had to give him painkillers and a sedative for him to calm down. And later a dosage of valium for home! The doctor said it’s not so much the pain but more his personality. (I’ve got a bit of a drama king on my hands). He continued freaking out for about 2 days, trying to get at the sutures, spinning around, whining etc. just being extremely difficult. Then he absolutely calmed down as the doctor said he would. PHEW. It was almost like he didn’t understand all this stuff that was going and wasn’t reacting well to it. Just when he was getting used to the blue thing, we go and take it off and now he has a naked leg.

Meanwhile, he literally sat for an entire two weeks. It’s as if knew that was the right thing to do. I picked him up to go outside to pee. He’d do his thing and was ready to be picked up again to go inside. I continued to give him his painkillers (buprenex) for about one week and the Rimadyl.

A week later (12 days post op) I had the sutures removed. He was wearing the donut on his head (the more comfortable version of the cone) but he really hated it. Once the sutures were gone i removed the donut but he kept trying to lick at the wound behind my back and was causing a tiny bit of an ulceration which was worrying me.

Two days later, as soon as it hit two weeks post-op, he was ready to roll. He tried to run, jump off the bed, and now was suddenly impossible to contain. When I put him outside to pee, he was walking around without a limp and using his knee as if nothing ever happened? BIZARRE.

I took him for his 2 week post-op and the surgeon said he was doing great, total mobility in his knee, but I should probably put the donut back on so he can’t lick the healing wound. He also said he has to take it easy for another two weeks. And that i might want to put some cortisone on the incision site.

Mack hates that donut so much, he would literally give me this depressed look that was hard to deal with. So I decided to get creative. The one thing he hates more than ANYTHING is the taste of Tramadol (one of his painkillers that is impossible to trick him into eating). So I crushed up the Tramadol and mixed it with the cortisone cream (animax — brilliant stuff) and put it on the incision site. BOY did that take care of my problem!!! I noticed him spitting and yakking as if he just ate the grossest thing in the world — aha he’d been trying to get at his wound! Well, after that, never again.

We’re now 3 weeks post op. The incision site is 95% healed. Not even a scar! Amazing. He’s not limping, has tried to play and romp which i’m not allowing. He is doing well but I’m still very nervous and know we’re not out of the red zone. 3 more weeks to go before things can get kinda normal… It’s been tough and stressful but definitely worth it. I will keep updating!