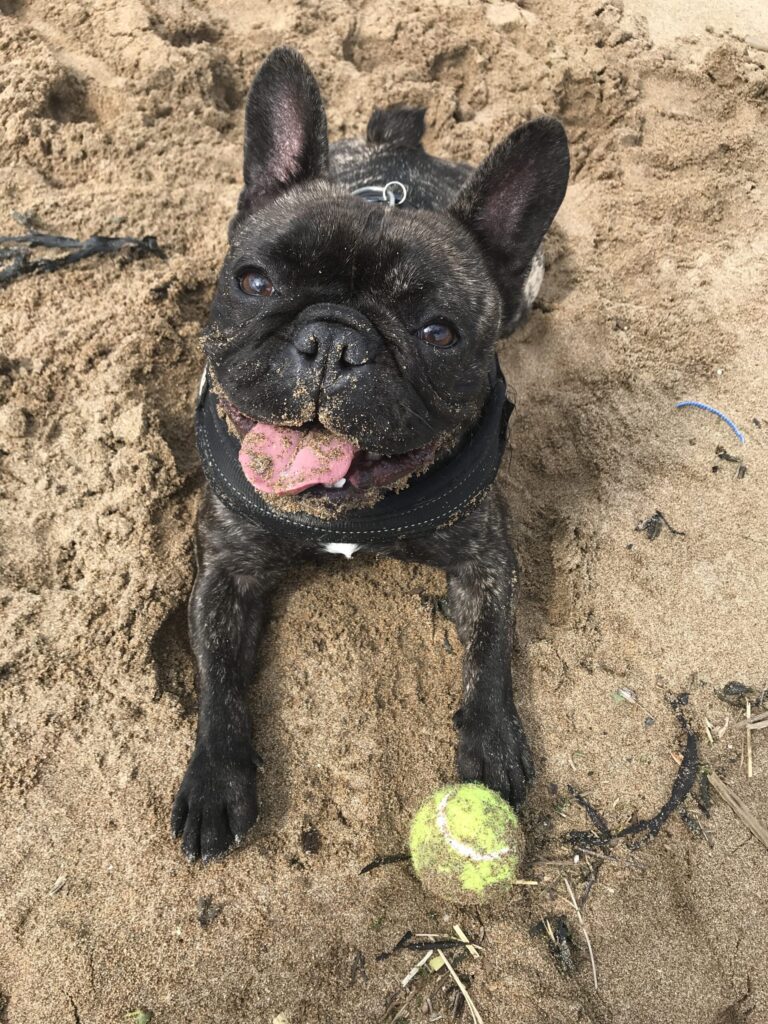 I have my (nearly 5-year-old) French Bulldog the lovely Fifi. One snowy and icy day in January she was playing with her big sister Lucy and ended up limping – I have no idea what happened!

I took her to the vets one week later & booked her in for a check-up on the leg. Vets did an X-Ray and said she has a partially ruptured tear of her hind right leg and recommended TPLO surgery for the following week. Cue BIG shock and lots of Dr. Google later, coupled with a feeling that the vets were not the nicest of people/offering the best level of care for her, I followed up by taking her to a highly recommended veterinary hospital for a second opinion.

2nd Vet examined the previous X-rays and came to the same conclusion that a TPLO surgery would offer the best chances of a full recovery and normality by the end of October 2021, possibly with some hydrotherapy/physio to aid rehabilitation.

After booking time off work, preparing the house (and my mind) that we were going to put our baby through invasive but necessary surgery to regain normality, surgery day loomed and I took her to the vets for the big op at 8 am. I then got a call at 4 pm from the vet saying he had completed his own x-rays and manipulated and palpated her leg under general anesthetic and came to the conclusion that although she shows lameness, inflammation and muscle atrophy on the leg, the degree of movement was too subtle to suggest the full reconstructive TPLO surgery. Comparing her damaged leg to her other leg (as a control), the degree of movement which would suggest a torn cruciate was only 2mm.

Most ruptured cruciate would show a higher degree of movement which would suggest the need for the surgery. In his opinion, this could not suggest a torn cruciate after all. I was SHOCKED as we had all mentally prepared for the big surgery and instead he suggested more conservative treatment and wanted to try a Platelet Rich Plasma therapy treatment. This involved taking a blood sample from Fifi and concentrating and injecting the nutrient-rich plasma into her affected joint to regenerate the ligament and promote healing. I agreed as I wholeheartedly trusted this vet who has great reviews and a couple of hours picked up my woozy and sore baby to bring her home for 3 weeks of strict rest and restrictive movements. He suggested the next course of action should this not work would be a costly laparoscopic investigation under GA on her leg to see what exactly is going wrong in this leg of hers before deciding a course of action.

3 weeks later, I took her back to the vet for a check-up unconvinced with any progression since my last visit. To my knowledge, she still was not using the leg as normal, nor weight bearing on the leg as usual although I had possibly noticed a SLIGHT reduction in lameness. Over the course of the recovery from the PRP, I would pick up her bad leg when she was unawares to see just how much weight she was bearing on it, and she would lift it off the floor with ease putting absolutely NO weight on this leg. Whereas if I picked up the good leg, she would go off balance, as if this was the only leg holding up her rear end. The vet however after checking her over, said he was pleasantly surprised with her recovery and commented on a reduction in both her lameness and the inflammation surrounding the joint. He suggested one more course of the PRP before ruling this treatment out. “He’s the vet” I concluded and as I don’t have X-ray vision, trusted his opinion over my own.

I am now nearly three weeks on from a second PRP treatment and 7 days away from another check-up with the vet post-op and I am in a complete state and at a loss of what I should do next. For the last three weeks, she has not been using the leg at all, and at times it has been completely in the air. Things seem to have progressed on worse than they were prior to the initial surgery day visit. I just don’t know whether she has habitually learned to not use this leg and there is in fact substantial improvement inside as the vet suggests, or whether this PRP is a complete waste of time, money, and more importantly my little girl’s well-being.

I am desperate to do right by her and get her back to fighting fit as soon as. She is missing out on her much-loved daily walks to the local fields, missing out on playing with her sister, and now my other dog is gaining weight because her own walks are limited as we put Fifi’s needs above the requirement for our usual 1-2 hour daily walks. Not ideal I know but I have now realized that when I take my other dog out alone, Fifi is pacing the house and even making herself sick as she is not used to the separation that this injury now causes between my two incredibly close dogs and to our entire pack. Thanks, doggy webcam you make me feel more awful than I do already putting her through all this!

Any advice that anyone has on whether this PRP is worth it, or whether I am just delaying the inevitable need for a TPLO/Suture surgery? My vet has not recommended any assistive therapies such as physio/hydro to supplement the PRP, and two months of bed rest cannot be doing my poor girls mental health any good too as she becomes more and more mischievous without her daily stimulation – which then results in her bounding around the garden. We are trying to give extra chew toys, learning tricks and practicing behavior training, and some scent games to keep her mind busy. She has lost substantial muscle in the affected leg and is not using it to walk around the garden/house as she should, has anyone experienced anything similar? Should I continue to trust my vet? Any home exercises or therapies that I could do too? I will do anything at this point.

I am seeing the vet again next week Wednesday although am going to try and phone earlier for a telephone consult, any questions that anyone thinks may be worth asking too I would be grateful to add to my already long list.

A very guilty doggy mama and her limpy girl x