My 4 year old black Lab, Tide, had the Traditional Repair done on her knee back in December 2008. 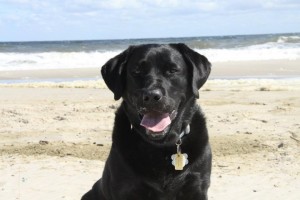 At about 5 1/2 months old Tide started to limp. Of course, being the crazy worried Mommy that I am, I thought Hip Dysplasia right away. Off to the vet we went where our doctor told us it’s probably just a soft tissue injury and to keep her rested for a few weeks and see how she does. Tide was scheduled for her spay two weeks later, so to ease our mind, we had x-rays taken of her hips. The x-rays came back that her hips were fine.

Two weeks passed with Tide not doing much but laying around, b/c of her spay incision. The very first day she took off running, like the 6 month old Labrador that she was, and started toe touching again. I immediately called the vet and brought her back in. I was in very upset and couldn’t understand how she was still limping, if this was in fact, a soft tissue injury. Our vet suggested leaving her for a few hours to be evaluated by an orthopedic vet, so of course, that’s what we did. No more then 30 minutes later after dropping her off, the Orthopedic Vet called telling us that Tide had Panosteitis, PANO, also known as growing pains in large breed dogs. He assured me that it was something she would out grow and that she would be back to her healthy self soon. He also told me that the pain would switch from leg to leg and not to restrict her exercise. To let Tide be the judge of what was too much if she was having discomfort and pain. What a relief!

Tide’s first summer was like a dream come true for an 8 month old Labrador. She swam for hours, ran on the beach, absolutely adored going out on the boat and seemed 100% healthy. That is except for those days where she ran a LITTLE too hard, but not knowing at the time, thought it was just the PANO flaring up. Towards the end of July was when Tide’s toe touching really started to concern me. I would watch Tide like a hawk, still do, and noticed that most of her limping, if not all, was ALWAYS on that back right leg. The doctor told me that it would switch legs, which it didn’t seem to be doing. Tide also was getting up very slowly from lying down. So, I started researching and contacted my vet. I asked about a torn cruciate and OCD and she said not to worry about her cruciate because she was so young. She told me that, most likely, the pain Tide was experiencing was probably still from the PANO. She prescribed me with Deramaxx, an anti-inflammatory, to ease some of Tide’s discomfort, and said to keep an eye on her. At the time, Tide was 10 months.

Another month went by and Tide STILL continued toe touching on that same leg after days of swimming and running around. I gave it another few weeks and then one day, I had enough. We were out on the boat all day and came home like normal. Nothing was out of the norm, but that night, after getting up from her nap, Tide lifted her leg completely off the ground and would not use it. I think that is when it really hit me that we were dealing with something other then PANO. I can’t tell you how painful it was to see my 11 month old Lab limping like a crippled dog. Broke my heart! 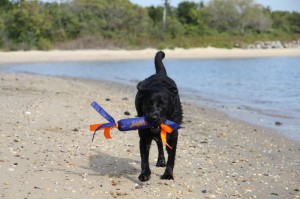 I made an appointment to see another orthopedic surgeon (I’ll call her Dr. S from now on), who BTW, I HIGHLY recommend if you are in the NJ area. Our first visit with Dr. S was a scary one. After manipulating Tide’s leg and almost every other joint in her body, Dr. S. pin-pointed that Tide’s pain was coming from her knee. She suggested x-rays and a drawer test under sedation. Needless to say the x-rays came back that there was something going on in her knee, lots of fluid, but she wasn’t sure what. She was leaning towards a torn cruciate or OCD, a genetic disease. Dr. S. also said that there was no laxity, from what she could tell, in Tide’s knee when they did the drawer test. At this point we were pretty confused. The only advice our surgeon could give us, at this point, was to either get a second opinion, and/or scope her knee. To me, scoping was NOT an option. So off for more opinions we went. If I knew then what I know now, I would have opted for the scope right then and there.

So, two more Orthopedic vet visits later, and a trip out to UPenn for a third opinion, and we still have no idea if Tide’s knee issues are from a torn cruciate or OCD. UPenn threw in a third possibility of a Luxating Patella which was quickly thrown out of the mix when we went back to see our original surgeon, Dr. S. So here we were, with our 13 month old Labrador, being told that the only thing left to do was to put Tide under anesthesia and scope her knee to see what the problem was. We went home from the vets that night pretty distressed and confused. I just wanted to make my puppy’s pain go away, for good.

For a few days my fiancé and I talked it over at length and finally decided that scoping Tide’s knee was the best option. I called Tide’s surgeon and she assured me I was doing the right thing. I thought all was good to go and we could just schedule the knee arthroscopy and be done, but then she asked me if Tide should undergo surgery while she was already under sedation. I didn’t hesitate, and said most definitely, yes. Why would I put my dog through any more of this? Let’s just get it done. Then Dr. S. confused me once again. She gave me the different surgical procedures, she felt most comfortable doing for a torn cruciate, if it did happen to be that, and told us to think about it. We did, I researched a little, and then had to call Dr. S for some advice. She explained each and every procedure thoroughly, first TPLO, which she felt was the most invasive out of the three and being Tide was so young, and still growing, didn’t think it was the best option. Then there was TTA, that she pretty much threw out of the equation completely before she even explained it, and finally, the Extracapsular Repair, Traditional. Dr. S. felt that the Traditional repair was by far the best option for Tide being she was only 72 lbs at the time, young, and, we didn’t know this at the time, but her cruciate was only partially torn. So here we were, faced with having to make a decision that could change Tide’s way of life forever. Not and easy thing to do at all. I started researching like a mad woman online for feedback and advice on different surgical options for a torn cruciate and also for OCD and made my decision.

Tide went in for arthroscopic surgery and knee surgery on December 4, 2008. Dropping her off in the morning was by far, the hardest thing I have EVER done in my entire life. Tide is like my child, so imagine dropping your 2 year old off to have surgery. Dr. S. thankfully kept in touch throughout the day, to keep me calm, and called when they finally knew what was causing Tide’s lameness. She had partially torn her cruciate and already had some arthritis in the knee, so she had the tear for quite some time, possibly since 5 ½ months old. The first thing I asked was what about the PANO and she said that she probably just had both issues. Poor dog. 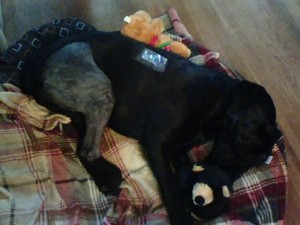 We picked Tide up the following day after surgery not knowing what to expect. We took all the extra precautions at home and built her a ramp and made sure we had everything ready to keep her rested and healthy. I just didn’t know what to expect and after reading stories, I was pretty nervous to say the least. But, when I saw her come through the waiting room doors, I was in shock. Here I was expecting this bandaged, groggy, whimpering, sad, pitiful dog, and out walked this happy and excited puppy. She was walking on all fours, still can’t believe that, and when she took one look at us, came bounding over, taking the vet tech with her. Not even surgery can slow my baby down. I just couldn’t believe how great she looked! Her incision was remarkably clean and it looked like it had been a week old already.

As I’m sure you know, keeping a young Labrador down was not an easy task. However, lazy Tide took to lying around, being pampered and smothered with love, the first five days after surgery, just fine. I would say after a week she was ripping to go though. She just couldn’t understand why there was no more running over to the neighbor’s to say hello, or jumping on the couch like normal. She eventually, after lots of refusal, figured out that being lazy and just hanging with mommy and daddy was the best thing to do. She went for short walks, after 2 weeks, on leash, and over time we increased the length to over a mile, sometimes even more. Eventually, after we got the OK from the surgeon, we started swim therapy which I really feel helped in her rehabilitation.

Today, Tide is 2 1/2 years post OP and I couldn’t be happier with the outcome. I have her on daily doses of Glucosamine and Chondriotin, as well as Trixsyn, and she hasn’t had any issues, knock on wood. Tide runs, swims, and jumps just like a normal 4 year old Lab should. She does come up lame on occasion after a long strenuous day, but my surgeon assured me that it’s perfectly normal with the type of procedure we chose. Now I just have to worry about that other knee. YIKES!