My Australian Shepherd, Shadow, is 7 years old now. He has always been a very active dog, so needless to say, the last four months have been crazy. 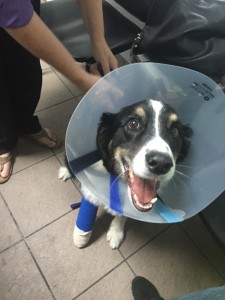 On October 13, Shadow was hit by a car; luckily the guy was barely moving 5 mph or this would’ve been way worse. Shadow’s right front leg was degloved from the wrist joint down, ruptured his medial collateral ligament, and fractured his ulnar process. I rushed him to the vet where he stayed for four nights. Keep in mind that I am a teacher, fresh out of college, so my pay currently is pretty crappy. No other veterinarian would even look at my dog’s case because of the nature of the injury.

Putting him down was simply not an option. Not for a foot injury. I was in shambles while talking to the orthopedic surgeon. He said Shadow needed debridement surgery and pins inserted into his ligament and then a second surgery to remove the pins. These two surgeries would have cost me more than $5,000. I didn’t have that money. Just in the week-long stay and wound care I depleted my minuscule savings and maxed out a credit card for a lovely amount of $1,250. The surgery would’ve been an additional $2,600…YIKES. 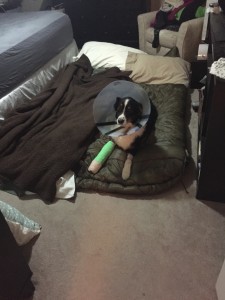 This wonderful orthopedic surgeon did me a massive solid. He knew I would never be able to afford that second surgery. He knocked $900 off the debridement AND he sutured the ligament back together and to surrounding tissues as it was ripped from the bone at no additional cost. I was given a debridement surgery and a ligamentous surgery mixed together for $900 cheaper than the original surgery. He said there was a 50/50 shot that it would hold. It held!

Post surgery, Shadow had a soft cast, splint, and collagen-based wound care with a two week round of antibiotics. It took 10 weeks for a scab to form over the wound and the smell thus far was atrocious. He was given Tramadol for pain and Trazodone for sleep. During this time, since the odds for his ligament holding were definitely not in his favor, I began him on fish oil and glucosamine/chondroiton supplements. I kept him rested and confined. Since he usually sleeps in the bed, I slept on the floor by him so he wouldn’t jump. 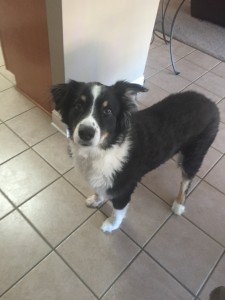 The surgery worked. He was able to fix the ligament. Shadow rarely limps and can run full speed again. He needed weekly wound changes and monthly x-rays which was a financial strain, but it was worth it. My sweet baby is back in action. I am very thankful for how this turned out. Shadow is my kid and my best friend. I bring him everywhere with me. He’s also a remarkable service dog. He has taken such good care of me that me not taking care of him was not an option.