Moby is a 2.5 yr old, neutered lab. About 6 weeks ago, he became leg-in-the-air lame on his left hind leg after an acute injury. This was diagnosed as an acute acl tear or rupture. But in retrospect, I think he was displaying a whole set of subtle symptoms that both knees were in trouble, symptoms which we did not recognize or act on.

Over the course of several weeks, Moby saw a total of 3 vets. They all had differing interpretations of the x-ray files (both knees plus hips), but all agreeing that there were signs of arthritic osteocytes outside the joint space. They had widely different takes on the hips, one said the left was iffy, another said the right, and one said neither. One said his future would be bleak regardless of what we did, the other said it would be great if tplos were done, the other didn’t comment. Two knew what TTA was, one never heard of it. Two think CM is like what you do for small dogs, one thought it was “do nothing”. One said the fibrosis scarring is what provides long term joint stability in all treatments, the others reluctantly admitted this and then changed the subject. They all called for bilateral TPLOs. When I asked for pointers to good studies comparing the long term results of aoo the options, none of them could point to anything but anecdotes. But there was a 4th opinion that were had to consider, Moby’s opinion. 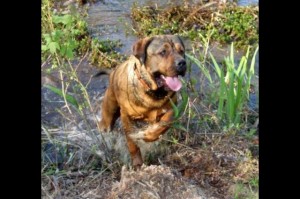 Upon getting the first diagnosis, we severly restricted Moby’s activities. We are fortunate to live right on a lake, so we let him swim, thinking this had little negative impact on the joint and it was important to keep up muscle mass. After a few days, the symptoms in his left leg were mostly gone. We took him off the rimadyl (thinking this was making him artificially feel better), but there was little difference. As the weeks passed, the symptoms subsided to mere reluctance to full weight bear for a few steps after rising from rest, then nothing. Eventually, even that went away. He did have a few what I call “escapes” where he ran or jumped off the dock onto hard ground or overstressed in some way, and the result was obvious in a return of symptoms to some degree. But again, they subsided in a day or two after proper restriction.

But more than that, the symptoms Moby had for perhaps a year prior to the injury were vanishing too. He was now sitting on his haunches as often as not (he would always sit on his hips prior to this). He was no longer “getting up like an old man” (as I used to say), he would just get up. He would stand around instead of always flop down whenever he didn’t have to move. And he would want to play while seeiming to feel a lot better overall. We could not ignore this “4th opinion” he was giving us.

Of course there was a ton of researching going on in parallel with all of this. TPLO sounded like radical, invasive surgery which has as many bad outcomes as very good outcomes (both about 15%). Mediocre outcomes were the norm (70%). TPLO originally claimed it would prevent a lot of future arthritis, but the evidence is now that it does not. Mobility is almost always reduced in TPLO. And just about the only thing left to move that way was the claim that it was better than CM, which is usually thought of by many vets as “do nothing” or “restrict for a few weeks, then let him go once symptoms subside”. But there’s another camp in the CM world that few know about, a camp that claims long term success as good as or maybe better than TPLO, even for large dogs.

tiggerpoz.com advocates a program of restraint and tapering back into activity over perhaps a much longer period than even post-op. The initial 6-8 week period is similar to post-op, but if there are signs that stability is improving after that, you begin the slow and cautious rehab phase. This can take months, many months. The dog will tell you if and when you can advance, increase activity. And when you do, you advace in small increments, always looking for return of symptoms as a flag to stop or retreat a bit until symptoms subside. The goal is not to get to a point where the dog can go on a couple 20 minute walks, then you’re done. The goal is to achieve the highest activity level you can without symptoms, whatever that happens to be. It may be the 2 20 minute walks. Or it may be running and/or off-leash walks with other dogs for hours. Getting there may take a long time, a long time.. But isn’t it worth it if you can avoid tplo? Especially bilateral tplos?

Moby is currently on that course and about 6 weeks into it. We are up to the 2 20 minute walks on an “extended leash” (a 16 foot rope) on woods trails with uneven ground and a few ups and downs. In addition to that, he swims for another 1/2-3/4 hour. Each activity is separated by at least a couple hours rest. Next week I’ll make them 25 minute walks and maybe I’ll jog the last 50 feet with him (my jog = his fast walk). The only symptom indicator I have left is whether or not he sits on his haunches. That works for me, I don’t want to have to see him limp to determine if we went too far. 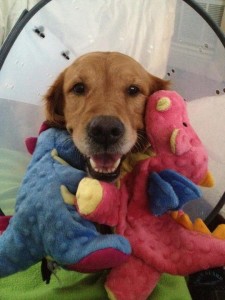 In the meantime, this gravitation toward the tiggerpoz style CM is complemented by a push away from TPLO as I think more about it. Moby would need bilateral TPLOs and both would have to be successful to achieve overall success. Remember that 15% failure rate I mentioned earlier? Well, Moby’s chances of having at least one failed TPLO is 15%+15% = 30%. That’s about 1/3, or like playing Russian Roulette with 2 bullets! Also, one of the vets said that it actually takes about a year for the dog to completely recover from a TPLO. Times 2, that’s 2 years. Moby’s 2 and labs live to about 12 leaving about 10 years. The last 2 probably won’t be very active for reasons other than his stiffles, leaving about 8 years of hopefully higher level activity living. Two years may not seem like much to you and me, but it’s a lot when compared to 8 years. And when you think that a big chunk of that 2 years will be in pain and severly restricted, well, it’s a big price to pay that has nothing to do with $$. Using the “7 years for a person = 1 year for a dog” concept, it would be like telling you that recouperation and rehab would be 14 years. You’d have to think twice about that.

So far, so good with Mby and his current CM course. When I see him prancing through the woods, alert, tail high, showing zero symptoms, I cannot in good conscious put him through bilateral TPLOs. It makes me sick to imagine what post-op would be like if I did that. I don’t kow what’s in Moby’s future. CM seems to be going fine and I hope we get good results that’ll last him his lifetime. But if not, if things get bad years from now, maybe total knee replacement will be available by then. Unlike TPLO, that does appear to be a real fix for very bad knees. But TPLO? I can’t see it..

If you are reading this, you probably have a large dog with bad stiffle(s). If so, I urge you to at least give the style of CM I described above a try (ref: tiggerpoz.com). You owe him/her at least that. You can always cut later if you feel you have to. But give him/her a chance.