Skip to content
Home » Conservative Management Instead of TPLO – Hudson

Hudson, a Lab mix, came into my life in April 2002 as a rescue from a local shelter. He was discovered abandoned at a car wash and he has never been alone again. Hudson is just a dude who loves his Daddy and Mommy and we adore him. I would sell all my possessions and live in a box if that is what it took to care for him. Judging from other posters to this site, my feelings are no different than others regarding their pets. But I have made some mistakes along the way.

At approximately 4 year of age, he showed significant hesitation in his normal activities. Short version is – We discovered serious hip dysplasia, had full hip replacement on both sides, and he had a full and healthy recovery. 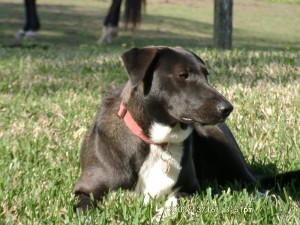 About 2 years ago, he came up limping on right rear leg. Testing indicated hips were fine, but knee was suspect. Admittedly we were upset being hit with a $1300 bill to find out what was done earlier (hip replacement) was ok and now you can spend more finding out what is wrong. As we contemplated making an appointment with recommended doctor for evaluation of knee, Hudson stopped limping, so we postponed evaluation and life went on.

About 3 weeks ago he started limping again. Not fully off the right leg, but favors it when getting up and during initial walk. He did (and still does) stand on it to pee (about 30% of time, uses left leg the remainder). We started him on fish oil (twice daily) as an anti-inflammatory. I poorly thought this was just a flash-back to earlier and keeping him inside more and not chasing/playing with his buddies would suffice.

Starting this week it appeared to be getting worse. So we took him in (I notice folks do not mention vet or clinic names, so I won’t…but will if asked). He had x-rays taken (and they asked if they could do routine blood work for kidney/liver function to gauge general health…I said ok). During our wait a nurse/technician showed us x-rays of horrible knee joints and told TPLO was the only way to go. It will fix our dog…this was before any evaluation!

Surgeon was delayed for some reason, so nurse/technician brought us Hudson’s x-rays. I am not a vet, but they looked nothing like what we had been shown. Realize you cannot tell a ligament tear/rupture from an x-ray, but you can measure bone misalignment, get some feeling for buildup of scar tissue, arthritis, etc. She started back-peddling a bit and said she was not that experienced (earlier she boasted of her 10+ years assisting this surgeon) and doctor was better at seeing the problems. 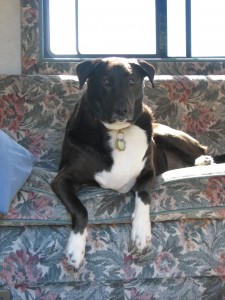 Regardless, doctor showed up. After a brief introduction (5th time at this hospital, 1st time with this fellow) he brushed by my wife and myself, stooped down to dog and pulled his leg. Hudson yelped and ran for the corner. Doctor said Hudson had torn ligaments in right leg (as indicated by the dog’s pain) and needed TPLO surgery right away. He also said we needed to do the left side also as typically during the recovery the stress generated on the non-repaired knee will cause it to fail. It was best to do both at same time…$4200 a piece (less ~$1200 discount for doing both at same time) and he had opening in his schedule for Thursday (this was a Tuesday). I started to remember the blood work being done…they already thought this was a go without any discussion/consultation? Reason for so quick was ligament was most likely not fully ruptured so meniscus was likely intact, so it needed to be done ASAP to prevent more damage. We gathered Hudson who fortunately could still walk; I took him to our car while my wife paid our bill ($398.10 for 2 x-rays, general blood work and our consultation).

Hard to drive when you are crying like a baby (I’m 58). Lots of stuff on my mind, but on the productive side I knew we needed much more information.

That brings me to this site (and similar ones) where experiences are shared. After reading many of your contributors stories and experiences, we contacted our regular vet (he is mostly a large animal fellow who takes care of our horses but has always been honest with us and we have known him for years…and right now I needed a professional I could trust) and relayed our experience. He stated the surgeon at the hospital had already contacted him (our local vet was the referral for the hip dysplasia diagnosis) and told him the dog had a ruptured CCL in right leg and damage in the left. The dog was tough (how do you know this…because Hudson only yelped and did not bite him when he pulled his leg?) and could take both TPLO procedures at once. Our local vet did not say (and my wife asked directly) this surgeon tried to convince him to convince us, just wanted him to know the facts before we talked to him. 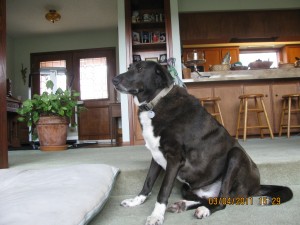 Anyway, our local large animal vet reviewed the x-rays and blood work (results fine), watched Hudson walk, gave a careful exam to both Hudson’s legs and felt (while he was not certain as the dog really tensed up and this stiffens the muscles making checking play in the joint difficult to detect) that he would not initiate the TPLO process (or any other surgical remedy) at this time. He also stated he would not do any surgical process simultaneously-risk was too high, animal may just quit due to the pain/rehabilitation stress). Our local vet was not certain the status of the ligaments. He did place a call to a radiographer and discuss passive options to determine ligament condition (CT scan was not viable; MRI was, but at a cost of $1500 to $2500). He felt the conservative management approach we learned from this site and told him about was a good one to try for at least 60 days. He felt nothing was to be lost and much to gain. It would give us some time to obtain even further information.

So we are on day 1 of our CM venture. Food is changing (we have historically believed you should take a few days to fully change from current food) to a weight management recipe (he is at least 10 lbs. overweight), Hudson remains on 2 tablets daily of Fish Oil capsules, we have started him on twice daily Chondroitin/Glucosamine tablets (SAM’s version) (pulverized), I have ordered the Yucca Oil Extract (another anti-inflammatory), we have spoken several times to Dr. Spatt and ordered the A- TraC Dynamic Brace (hopefully get middle of next week), Hudson is under house arrest (as my Mom call’s it)…minimal walking on leash only!. I will now be sleeping downstairs…no steps…we have put up barricade to stairs.

I am not a person of strong faith but I am praying daily for my dog to recover. This experience has placed his mortality in the forefront of my mind and I truly cannot imagine his not being my best friend forever.

I am open to any ideas to assist in this process. That includes experiences with a surgical remedy, though at 9 years old and having been through 2 hip replacements (although it truly went fine and he was given a better quality of life to date) I currently cannot imagine putting him through a similar or more invasive process again at this time in his life.

Thank you for your time.

76 thoughts on “Conservative Management Instead of TPLO – Hudson”