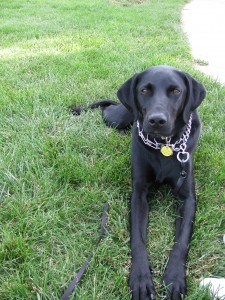 I adopted my dog, Buck, as a young adult in July, 2009. He was separated from his brother at adoption and we soon found out he suffered serious separation anxiety. He was approximately one year old. In May, 2011, we were at a dog park and he was running full speed and collided hip to hip with another dog. Buck came away from this impact holding up his right rear leg. He had been favoring this leg a little in the few weeks prior to this – I figured it was from running around the yard with our puppy (his new anti separation anxiety companion). Buck is a 0-60 dog. He can appear to be a couch potato one minute, and then he’ll run out the door at “60 mph” the next.

A week later he was still favoring his right rear leg so I took him to my vet. Upon examination the vet said it was his CCL/knee/stifle and for a 70# dog (Buck is lab/GSHP mix) the more expensive and more invasive surgeries were recommended. Open to alternative ideas, I went home and got back on the internet.

Tiggerpoz.com was very helpful to me. I decided to try the CM (Conservative Management) route, which wasn’t easy considering it was summertime, but healing from surgery with a puppy around didn’t sound any better and I sure wasn’t in the market for a $3500 TPLO surgery! He’d seem to get better, and then he’d start running around and get gimpy so we decided to support his right rear leg with an Orthopets brace in 2012 (obviously we were really trying to avoid invasive, expensive surgery). Through my research, I was prepared that it was going to cost us about $700 and by the end we had $1500 into the Orthopets brace due to rubbing, multiple visits, and adding a piece to the brace. To her credit, the Orthopets vet recommended surgery on a dog this young (4 years). What she didn’t say was that the less expensive, less invasive traditional (extracapslar) surgery was an option. Knowing this would have made all the difference. Unfortunately, it has become very clear to me that 75%+ of vets do not acknowledge this as an option. Let’s educate ourselves, and them, otherwise – read on…

At this point my stress levels were high and I want those of you who have a dog with separation anxiety, knee issues, children, and work to attend to that I can empathize with your situation if you are considering euthanasia. But first, let me tell you the answer to Buck’s problems.

We barely had the Orthopets brace figured out when his left rear knee blew around June of 2012. Of course, this is no surprise based on the statistic everyone tells you – if one knee blows it’s likely the other one will also eventually blow. I was at the end of my rope, as you can imagine. CCL/stifle/knee injuries are not something I would wish on anyone – it is a stressful situation.

I do not know how I came across this animal physical therapist’s contact info, but I had called her when Buck’s first/right knee went out. She mentioned a local vet who did the traditional/older version of surgery (extracapslar). She had watched him in surgery and he was the only vet she’d bring her dog to if it were in the same situation. Do not ask me why I did not pursue this angle when I first found out about it; I do not know. But my long route to success is your short cut.

I finally called the vet recommended by the physical therapist, Dr. Mike Jewell with The Pet Wellness Clinic in Fort Collins, CO, and made an appointment for him to examine Buck. Together we determined that Buck’s best chance was to have his left leg fixed surgically, using the traditional/older extracapslar method, as it was in worse shape (little to no weight bearing) and the right leg was semi stable but getting stressed further by the useless left leg. Dr. Mike Jewell has 13 years experience doing this traditional extracapslar surgery on all sized dogs – both small and large – with veritably 100% success over the long term. The total cost of the surgery, meds, blood work and follow up was around $1500.

Buck went in for his extracapslar surgery on his left rear knee in August of 2012 (by the way, the vet used an 80# nylon line on Buck’s knee). On even larger dogs they have had success using two 80# nylon lines. In addition, they use metal clamps vs. tying the line(s) and this is an important difference to note as you may find naysayers in doing your research regarding extracapslar surgery – if you do find out why – it may be that the line(s) were tied vs. clamped.

It is now April, 2013 and both my husband and I can say that both his rear legs look and act “normal”, although he is still rebuilding muscle. He had one instance of a pulled groin muscle, post surgery. He was on Rimadyl twice – one round for surgery and one round for the groin pull. His blood was monitored and he handled the Rimadyl fine. The Pet Wellness Clinic has an “east meets west” philosophy and we were comfortable with the recommendations made by Dr. Mike Jewell for pain management, etc.

Due to healing from the surgery on the left leg, he atrophied further than I allowed him to when I tried the CM route, when just his right leg was affected. This is important to note because perhaps I did not have him lie around enough when I was trying to get his right leg healed by CM (prior to his left leg going out). I will say I did all I was able to and evidently I couldn’t keep him still enough to totally heal his right leg by CM. Subsequently however, all the laying around waiting for the left leg to heal from surgery actually helped his right leg with the CM route automatically, so in essence it was a bonus for us and Buck. He now has his left leg stabilized with traditional extrapcapslar surgery and his right leg stabilized with CM. The $1500 Orthopets brace continues to collect dust on a shelf in the closet.

We have not done any joint supplements or physical therapy – simply walking him builds his muscle the fastest. We also moved into a house where he uses the carpeted stairs quite a bit which we think is really good physical therapy for his recovery. Should his right leg ever give him problems again, we would not hesitate to do the traditional extracapslar surgery with Dr. Mike Jewell on his right leg as well.

I want to share with you my frustration of living in Fort Collins, CO, home of CSU’s Veterinary Hospital, one of the top in the nation. It is beyond words why 3 out of 4 of the vets I consulted about Buck’s situation were unable to provide me with legitimate expertise. I do not know where all of these vets graduated from; I just have a higher standard of veterinary services because I live in this town.

Expertise doesn’t come from a book; it comes from experience. Find an experienced vet – one experienced in performing (traditional) surgeries on dog’s knees. If you don’t like the first answer you get, move on to the next.

I just met a vet student who is about to graduate and start her internship. I brazenly, it seems, shared Buck’s story with her in the hopes that it would give her insight into the reality of CCL (knee/stifle) injuries in dogs. Her response to the CM route was textbook negative – that it builds up scar tissue and results in arthritis (perhaps, but the same thing is said about surgery), and that anything but the more expensive, more invasive surgeries shouldn’t be used on large dogs.

She was brainwashed from her textbooks and her professors! My dog and I live in the real world and it didn’t seem to matter to her that Dr. Mike Jewell has 13 years of successful experience in the CCL/stifle/knee injury arena and that Buck and I are living proof of what can happen with CM as well as traditional (extracapslar) surgery – after all, Buck has two legs to prove it! I try to give people the benefit of the doubt – but I was completely floored by her response and it makes me wary of so-called “professionals and experts”.

Unfortunately, much of life seems to be learning things the hard way/by looking back in retrospect, but we hope our story will shorten your learning curve so you know ALL of your options and can choose the best one for you and your pet, whether it’s CM or surgery.