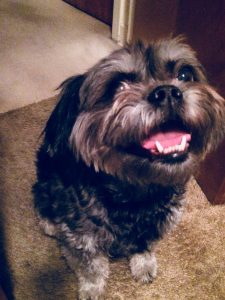 Chubi is now 7 tears old. About a year ago, I noticed that Chubi was limping. At one point she was unable to get up the stairs. I went to the vet and they recommended some muscle relaxants and that the dog only have short walks for about 2 weeks. This seemed to work and Chubi seemed back to normal. About 6 months ago Chubi started limping again.

I returned to the vet and they suggested that she see a specialist. I went to see the specialist and while waiting for the doctor, a man came up to me and exclaimed the he had just spent $6,000 on his dog and the dog died anyways and he advised me to not walk but run out. To be honest I do not know the full story of what was wrong with his dog. I was committed to know what was going on with Chubi. It is one of those situations where you want to know and you don’t want to know.

Chubi and I met with the vet and she was examined and  X-rays were suggested. I had also filmed her walking and limping. The results of the X-rays showed that she had a complete rupture of the ligament in her left knee and partial in her right knee. They recommended surgery on her left knee and gave me two choices; a lateral suture at $2,800, or TPLO at $3,800 to $4,000 plus tax. I am conflicted over what to do.

For now Chubi is under conservative management with my regular vet which consists of supplements and monthly injections. I even looked into alternatives such as knee braces and red light therapy, which may be hocus pocus medicine. I did purchase a red light therapy unit but have yet to try it. I am single and live alone so I have considered having the surgery done when I retire in a few months because she would require constant care.

Chubi is overweight, and yes I am one of those who gives her table scraps and treats. She was under weight control food from the vet but she developed crystals in her urine and I had to switch to a different food. Chubi at one point was on the right track and loosing weight, then my sister and brother in law moved in and he started to feed her table scraps. I should have stopped him but I am the type of person who avoids confrontation, and after they left I continued to feed her both my food and her food.

The only one who has lost weight so far is me. I used to walk Chubi twice a day before  and after work. At this point, Chubi will only walk short distances and stop frequently and lie down. There are days when she will not put weight on her left leg. I live in a split level home and Chubi and I are up and down the stairs frequently. I also drive an SUV which is quite high so that I pick her up and put her on the seat and will not allow her to jump down.

I really love my dog and she loves me. As you well know dogs are unable to tell us how much pain they are in. Through this all Chubi seems to be happy and should stand as an inspiration to us all. Some people including family have suggested that I let nature take its course and would be totally nuts to even consider high cost surgery. I myself would not even consider doing it until she has lost weight, which is another story in and of its own because if I don’t feed her while walking her she will eat her own poop and pick up scraps.

What to do, what to do? By the way, I did purchase her at a pet shop and chose her because she was ugly and scrawny, which family members pointed out to me but beauty is in the eye of the beholder and she is now cute as a button . Please feel free to comment.