Hello! I stumbled onto this page after frantically searching the Internet for answers to the horrible diagnosis I received on Tuesday July 24th 2018 for my dog, Brewster! Brewster is a 1 year old, happy, playful American Staffordshire Terrier. He was born on Mother’s day 2017. I adopted him from a local pitbull rescue here in upstate NY when he was 8 weeks old! A few months later we adopted another pup from the same rescue, and her name is Tigger. She is now 7 months old! I’m also a first time dog owner. I never could have imagined how much owning a dog would change my life. The joy and happiness that has been brought into our lives is unimaginable and my dogs are my whole world!

A little over 3 weeks ago I noticed that Brewster had somewhat of a limp. The thing is, he only had the limp when he would get up from a resting position or a sitting position. When it first started I could have sworn it was the right leg, and now it’s the left hind leg. Anyways, for a few hours on one of the days, he did hold his leg up, but it wasn’t a constant thing, and only happened a few times that day. I thought that he pulled a muscle or something along those lines while playing with his Sister, Tigger.

Over the next 3 weeks, the limping was still there, but again it was only when he would get up from a resting position or sitting. Once he would walk a few steps and loosened up, the limp would stop. Didn’t seem to be in any kind of pain, and was still running and playing like a normal puppy. He let me touch his leg, move his leg etc., and it didn’t seem to bother him at all. Because he still had the limping when getting up, I decided to just have our vet look at it not thinking anything of it. They sedated him, took x-rays and that was that!

The vet came out and took me in the back to show me the x-rays and that’s when she dropped the bomb on me! She said that Brewster had ruptured his CCL and needed surgery immediately! On top of that, she also told me that Brewster had hip dysplasia!! What?? How?? Why?? I could not believe what I was just told!! I couldn’t find any words, and out the door Brewster and I went! Once I got home and let the news set in, I got on the Internet to try and find answer’s and figure out what I had been told. After reading everything and anything about these two conditions, I have questions!!

How could she see a full rupture when everything I’ve read says it can’t be seen on an x-ray? What if the limp is actually a result of the hip dysplasia? He has multiple signs of the hip dysplasia, and I’m wondering if the CCL diagnosis is wrong?? After everything I have read about CCL surgeries, I most certainly do not want Brewster having surgery unless it’s absolutely necessary. I am scared to death I’m making the wrong decision, but I am sold on conservative management. Only worries are keeping a 1 year old puppy on restricted activities.. I’m looking for any and all feedback, help, guidance, information and resources.

What about knee braces? What supplements are best? Anyone else been through something similar? Please help!! 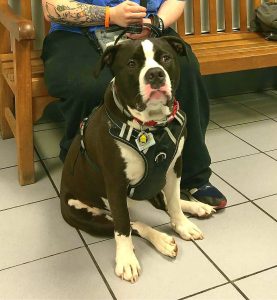 One Response to Brewster – Ruptured CCL