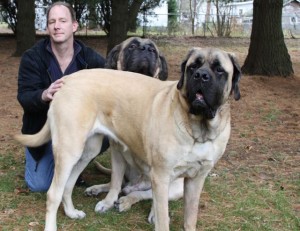 My Kendra slipped and fell on a very icy day in my yard. She was running and hit an ice patch in the yard with a slight slope. At 180 lbs, she hit so hard that the gouge in the yard where she hit remained for a year. She tore both ACL’s to near complete tears. She couldn’t walk at all. It took me over an hour to slide and get her into the house. I thought at 3 yrs old, her life was over.

I took her to one Vet Clinic, they would only perform TPLO on one knee. Then after healing and therapy, they would do the other knee. This is not an option for a 180 lb Mastiff. Not a dog that can easily harness or towel walked – takes two people.

I brought her to Cornell University, where they had performed all of the options on various dogs, including bilateral TTA. Said their average was that most dogs could put pressure on their legs in about 5 days. It was one operation, one anesthesia, one physical therapy etc, etc. Half the cost of stretching out over two different TPLO’s. Further, less invasive. And, she ended up being able to put pressure on both legs with a harness in 3 days. Yes, a teaching hospital, yes, less expensive. Less effective….NO. More effective.

She went to physical therapy every week for months. I took her to TheraVet Acres in Webster. I wished I had known they would have done alot of the work right after surgery. I tried to do alot and it was over my head at times while also trying to work. They will take a dog post surgery and do the whole initial work. Gets the dog rolling even faster. 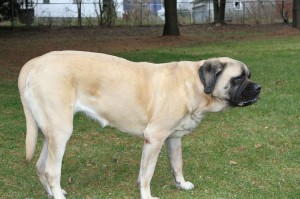 So now, Kendra is nearly 6 years old and she can outrun my other two Mastiffs and as a female against her two male buddies – she is much stronger. And she could take me out if she ran into me. Her latest evaluation shows an incredible recovery and immense muscle tone. So, no – you don’t have to lose a dog over this, and it definitely pays to get a second or third evaluation. I preferred to find a hospital that could be objective and evaluate the dog for various procedures and pick the best option for the dog, and liked the fact that they could do several of the procedures.

Kendra is a rock and I dare say she is even stronger now and possibly more fit than my two younger males.

One thought on “Bilateral TTA and Physical Therapy – Kendra”