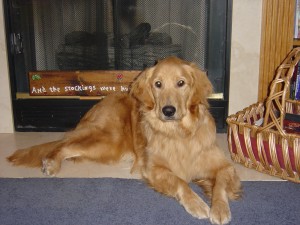 This week we have seen a big improvement in Beau’s ease in getting around. In fact, he thinks he’s superdog! He clearly isn’t feeling much pain, so we have eased off on the Tramadol, but continue to give him the Metacam and the Acepromozine for sedation. The most difficult part of the week is getting him to just lay around. We’ve invented some little games to keep him busy but still – such as a toy we have that has stuffed, squeaky squirrels hidden in a stuffed tree and he has to work to get them all out. To up that game a bit, we hide a small cookie at the bottom. When he’s really full of himself, a small rawhide chewie settles him down a bit – but they sure don’t last very long. He’s never done well with the big rawhide bones – loves them, but his gums start too bleed. We have some very thick sweet potato chewies that do last longer, but they are expensive.

At the end of the week, Beau had a check up and got his sutures removed. His leg is getting a bit of hair back and the twelve inch incision looks very good. We were very lucky that Beau did not mess with his incision. I was ready with a pair of old boxers and a T shirt, to cover and distract, but they turned out to be unnecessary. The vet was pleased with his progress and indicating we were now entering the physical rehabilitation period. The idea is to build his muscle back up without over stressing the knee joints/ligaments. Her recommendations for the next month: