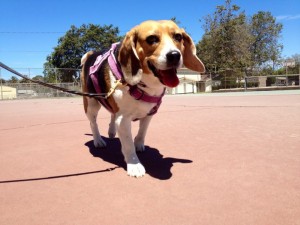 My precious little rescue beagle, Stevie Girl, came to us when she was approximately one year old. We were lucky enough to have received her via the local animal shelter. The shelter did not have any facts regarding her previous life prior to arriving to the shelter; they did not even know her former name. I called her Stevie Girl after a beloved brother who had passed away many years prior. She seemed to have that same mischievous, loving twinkle in her eyes and she was very gentle and calm. I fell in love with her immediately and the love has only deepened and widened as the years have passed. She is now seven years old.

We have gone through so much with Stevie; not knowing the Houdini aspect of the beagle, she had dug her way under a fence and broke free one day, shortly after we had gotten her. She was struck by a car and had fractured her pelvic bone. The vets we brought her to thought crating her in lieu of surgery was the best option at that point, as she was young enough to repair well on her own. So she was crated for approximately four months and recovered well. That was a terrifying incident for our family; knowing full well that she easily could have been killed and removed from our lives, we have kept a close vigilance ever since.

Stevie Girl very quickly became the centerpiece of our lives. We structured our lives and schedules around her needs. She loved long walks, especially to places where she had not been before. Always curious; always brave and up to whatever the task was, she taught us a great deal. Her unusually calm nature was always accompanied by tons of love.

The following year, when we were living in Los Angeles (which is where Stevie came from), we used to take her up to Griffith Park for her long walks. A couple of days after one walk, in the summer, she developed what appeared to be a cyst on her hindquarter. We took her to the vet and she was treated and released – about three times, as it kept reappearing. Finally, we took her back to the vet hospital that had suggested the crating for the pelvic fracture and a couple of x-rays later, it was discovered Stevie had a fox tail in her hindquarter.. We didn’t even know what a fox tail was or what damage it could do until that time. So she had her first surgery with us, to remove the fox tail. Another narrow escape, seeing that the fox tail could have traveled into her lungs and/or heart and killed her!

So here comes the knee injury story, about two years later. We noticed that Stevie was limping at night a lot. Quickly taking her to the vet, x-rays were taken and it was discovered that she had torn her ACL in her knee. The tear was so bad that she needed surgery as soon as possible. About a month later, she had the surgery; I had to max out a credit card to pay for it: $5,000! Yet I could not bear to see my Stevie Girl in pain and limping!! The surgery ended up being successful although she still had to be crated again; this time for about five months. That was extremely difficult; very painful. 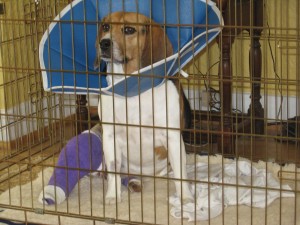 That surgery occurred in May 2010. At the time of the surgery, the vet that did the surgery told us that the likelihood of Stevie blowing out her other leg (back leg; another ACL) was high, simply due to the fact that had incurred this injury. That did indeed happen and she is currently in the midst of an alternative treatment for the torn ACL, due basically to our inability to afford another $5,000 surgery at this time. We are hoping to see improvement and hoping, likely against all odds, that she will not require an additional surgery.

The treatment is a once a week injection of a medication called Adequan and it is used primarily for osteoporosis in dogs and horses. Our vet told us it will create fluid between the joints and therefore, not allow the bones to rub against each other. Normally, it is administered twice a week for one month but our vet said that she has seen better results for once a week treatments over two months, so we are deferring to her expertise. She also stated that it is less traumatic and painful for the patient to receive the injections weekly, instead of every four days or so. I liked that a lot; the less pain my precious little girl in is, the better. 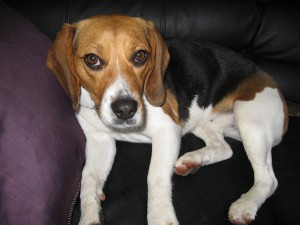 So this treatment is affordable; the cost of each injection goes according to the pet’s weight and little Stevie Girl is approximately 40 lbs., so she is really not so little I suppose and her injection costs about $45 each. The total will be something around $400 total which is a huge difference from $5,000!

It has been two and a half weeks and I actually do see improvement although we started putting her on pain meds as well. She takes Metacam and Tramadol. I just do not want her to have to be on pain medication for the rest of her life; however, if she stops limping and looking/feeling like she is in pain, I will do it. It will take another six weeks to see if this is truly going to work. I hope and pray that it does; otherwise, surgery is inevitable and I will have to start looking into finding sponsors to assist with paying for her surgery as I will just never have that large amount of money to do it alone.

Hopefully, hearing about Adequan will help other dog parents with their dogs. Certainly, any injury severe enough to require surgery will ultimately cause arthritis in a dog. It is a limited treatment; not ongoing and not too expensive. My hope is that someone reads this story when their dog is barely beginning to show pain and the repairing can begin earlier and be more effective for their dog. I do love my Stevie Girl in a very unique way; I believe she was meant to be with me and I with her, but I love all dogs in general. Best wishes and kindest regards to all and their dogs!